The BMC and the Pinnacle Club are joining forces this year to run a Women’s International Climbing Meet in North Wales, celebrating women’s trad climbing and hopefully inspiring more women to get involved and push themselves in the sport. 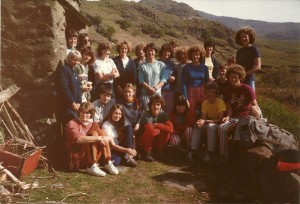 It’s not the first time an event like this has happened – 32 years ago, in 1984, the Pinnacle Club ran a ‘climbing meet with an international flavour’ that saw some of the best and most enthusiastic women climbers of the day come to test themselves on North Wales trad.

Jill Lawrence, Angela Soper and Gill Price from the UK (all three Pinnacle Club members); Catherine Destivelle and Christine Jambert from France; Rosie Andrews from the USA; along with climbers from Switzerland, Ireland and Belgium. The meet included the full spectrum – beginners to extreme leaders, rock climbers and mountaineers.

May 29 was the highlight – as Angela, then Vice-President of the Pinnacle Club, wrote at the time:

The place: Dinas Cromlech. All stances and ledges occupied. Leaders on Left Wall, Resurrection, Cenotaph Corner and Right Wall. All women, with women waiting to climb. Madeleine had settled for a damp Corner and Christine for a dry Resurrection. Janet queued for Left Wall while Alison moved round to The Thing. Jill and Rosie, who have climbed together extensively since the last Women’s International, tossed a coin about Right Wall. Jill won and chose to go for it.

How did it feel to be the first woman to lead Right Wall and break into the E5 grade? Was Jill aware of Christine cruising up Resurrection, of Judy seconding it beautifully, of Catherine leading the next rope? Did she envy the climbers on the warm left wall and feel for Janet on her first E3? Was she bothered by the photographers, the abseilers, the jokers on the ledge? Could she feel good vibrations from everybody willing it to go well?

Jill could tell us now. As the sun warmed the Right Wall, she won the battle 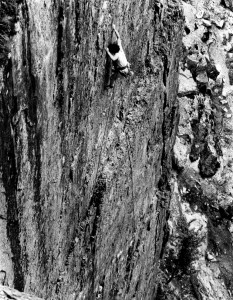 in her head, committed herself to the unprotected moves of the first crux and made them safely. A rest, the second crux, and twenty voices shouting ‘Well done, Jill’. Rosie then led Right Wall confidently while we others dispersed to Grond, Curfew and Crucifix. Next day both French girls led Right Wall (Catherine Destivelle pictured right) Would these ascents have been made but for the meet? Probably not yet. In Rosie’s words ‘If it hadn’t been for the others wanting to do it, I’d have waited till I was ready’.

On a meet we encourage each other, in words and by example, and this is how psychological barriers get broken. Jill on Right Wall, Janet on Left Wall, Sheila on Meshach, each pushing into a new grade, could all sense the communal spirit of ‘go for it’. We understand that everyone gets the same reward from climbing, whatever her personal limit. If climbs were graded by women, many would be in a different category, and it helps a lot to discuss a route with a woman who has already done it.

Women climb with imaginative footwork, balance, exact positioning of the body. They become stronger from climbing, but depend mainly on technique. During this meet well over a hundred Extreme leads were made, at least thirty E3 or harder, on all types of rock, and there were very few falls or lapses from good style. But the meet was not entirely about hard routes. Many less experienced climbers enjoyed the classics and had their first taste of more challenging climbs.

Who knows if new barriers will be broken on the 2016 Women’s International Climbing Meet – but we can be sure that the sense of community, encouragement, challenge and reward will be there in spades.