The Welsh 3000s: A Short Tale of Joy and Joyful Despair

What follows is a Blog written at the request of the President after she agreed for Freddie to stay at Cwm Dyli in order to attempt the Welsh 3000s as a tribute to his Great Grandmother, Daloni Seth Hughes, who was a member of the Pinnacle Club from 1931. The attempt did not go well but makes for an entertaining read and is a cautionary tale for those tempted to celebrate too early! 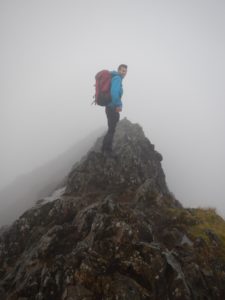 The Welsh 3000s: A Short Tale of Joy and Joyful Despair.

We fell out of the rain and into the Hut at about 10pm; our bags of food and clothes spilling onto the slate floor as we felt around in the darkness for a light switch. It was cold and we were wet, so after a quick exploration of the hut, Poppy got to work on the fire as I ran through the arrival to-do list. Only an hour later the coal fire was going and the hut slowly began to warm up and glow orange as we sat and ate at the wooden table; a table made for a map to be thrown across and penned with excited fingers. 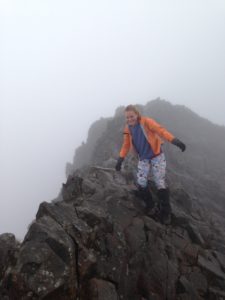 We arrived at the Pen-y-Pass car park at 6:45am and were surprised to see many other jolly faces poking out between dewy hats and high-zip raincoats. The first sound to make it through the mist from the direction of a particularly happy-looking group was the delightful; ‘whiskey?’, followed by a less muffled sound of ‘Yes Please!’.
At 7am we were off up the Pyg Track and on our way to the first peak of the trip. Dawn turned to day and the sky turned black to grey to almost white as we walked along the stone path in the mist. Very soon we were scrambling up towards Crib Goch.

Spectacular views lay somewhere below us as we wandered through the sea of fog along the ridge of Crib Goch. ‘We wandered’ is perhaps a little misleading as Poppy was mainly on all fours.

Next on the list was Crib y Ddysgl, just a short way along the ridge towards Snowdon. Not knowing the route very well, we came off the ridge at a point where the climb in front of us looked too difficult to be the correct and ended up losing a lot of height. After finding ourselves in the middle of a scree slope, we resolved to climb steeply back towards the ridge, where we were soon at the summit of our second peak. Here we sat and enjoyed a sensible amount of whiskey and chocolate. 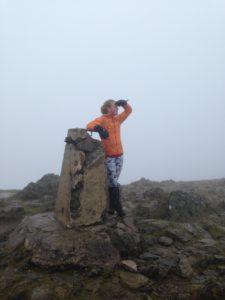 We were at the top of Snowdon in no time at all, and walking back along the train tracks in even less time as the summit was crowded and without any views because of the fog. Now began the long slog over to Elidir Fawr, the most inconvenient of the 15 peaks. This involved a walk along the railway track where we were finally treated to some good sights and our first glimpse of the sea, before a steep and wet descent down to Nant Peris. Here we stopped at the Vaynol Arms for a quick pint, some mini cheddars and our first very cheesy sandwich. As we began the ascent up to Elidr Fawr we passed a group of rather sorry looking walkers who recommended that we avoid the track up the valley unless we had some masochistic desire to fill our boots with mud. We took their advice and duly headed in a long diagonal up to the peak.

It wasn’t until 4pm that we left Elidr Fawr and made our way over to Y Garn, via Foel Goch. By the time we had arrived it was dark and we were both wearing our head torches. It had now fully dawned on us that we would be walking throughout the night if we had any chance of finishing the route, but we were both in good spirits and felt quietly confident that if we simply continued plodding along we would finish nonetheless at about sunrise.

The next peak on the list was Glyder Fawr. To reach this, we descended gently in total darkness to the lake Llyn y Cwn before climbing in zigzags through deep channels of scree. To our great relief we soon stumbled on to the first of many cairns that proceeded to lead us to the top. At the summit, some more whiskey was sipped and we enjoyed what would be our last moments of navigational confidence.

The walk to Glyder Fach began well. As we walked on a bearing through the darkness, cairns would suddenly appear reassuringly before us. But all too soon the cairns stopped appearing and after a long stretch of walking we found ourselves lost and with nothing but thick black mist around us. Looking at the map, we decided to head north until we hit the edge of the ridge. Once here we continued walking NE along the ridge, hoping that Glyder Fach would suddenly appear before us and with it the route across to Tryfan. Unfortunately Glyder Fach never showed up and so in an attempt to regain control of our situation we pulled out Poppy’s bothy bag, filled it with air, and then tucked ourselves inside; sitting on the edges to maintain a warm air bubble. We enjoyed a few moments of relative warmth as we huddled up and ate our second sandwich and tried to work out what to do. It wasn’t until we started feeling light-headed that we realised we had been sitting on the air vent and that it was time to get out and walk on.

Because we were unsure where the climb down to the saddle next to Tryfan began, we decided to follow the ridge we were on SE until we hit the miners track, which would then lead us back up to the wall between Gyder Fach and Tryfan. This was a long and slightly nervy walk, for we were unsure how defined this miners track would be and were worried about missing it in the darkness. Fortunately we found it, and soon enough we were sheltering next to the saddle wall in our bothy bag and trying to remember the route up to Adam and Eve. By this time it was almost 1 o’clock in the morning. We rallied ourselves from our bivvy and began the climb up to the top of Tryfan. In the thick mist and complete darkness it was impossible to make out any silhouette of the peak ahead of us. We climbed for over half an hour, frequently having to turn back on ourselves when the climbing became too difficult. Suddenly we emerged upon a wall; a wall I took to be the one we had started from 40 minutes or so ago, which caused me to have a sudden moment of internal crisis as I questioned the very physics of the mountain.

We decided then that finishing the 3000s was not something either of us wanted to do that night. The thought of attempting to climb Tryfan again in the dark, before climbing back down and descending to Llyn Ogwen and then climbing up to Pen y Ole Wen to begin the Carnedds, was at that moment too much to bear. Instead we set off rather miserably towards the Ogwen Warden Centre. 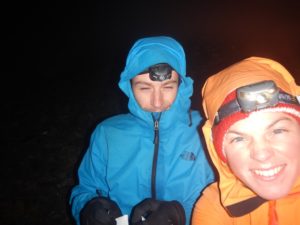 We arrived at the centre at sometime after 2am. Unsurprisingly there was nobody around, no buses and no one to hitch a lift with back to our car. Our one hope had been that we would have enough signal on our phones to call a taxi but my phone was dead and Poppy’s was without signal. Even the payphone in the car park, which had the number for a local taxi service conveniently displayed on the handset, was out of order. We were without a tent and sleeping bags and were both very tired. Thankfully Poppy discovered that the disabled toilet in the Warden Centre was open and very warm so we decided to curl up in there and sleep until morning. However, we soon discovered that the lights were on a motion sensor and so came on violently whenever one of us dared to adjust our limbs. It was not a very comfortable night.

We were asked to leave by an unsympathetic warden at 7:30am. 5 minutes after standing on the edge of the road we were kindly picked up and dropped off at the Plas y Brenin mountain lodge, where we ordered a large breakfast. Finally we hitched a second lift back to the Pen-y-Pass car park where we were greeted with a £10 parking ticket. Exhausted, and as the rain and wind blew unforgivingly around us, we settled on heading back to the hut to warm up and have a few hours sleep before driving home. 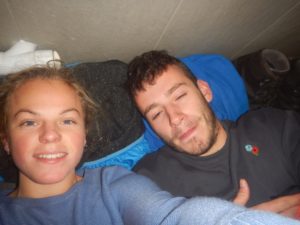 Completing the 3000s in November was a tough challenge to set ourselves and I realise now that we did not do enough to stack the odds in our favour. Firstly, we left too late in the morning. Had we set off from the Pen-y-Pas car park earlier we could have reached Snowdon in the dark by the miners track and then set out for Crib-y-Ddysgl and Crib Goch as the sun came up. This would have increased our chances of completing the Glyders before nightfall. Secondly, it was perhaps a fatal decision to stop for a pint before climbing Elidir Fawr as this sealed the fact that we would have to tackle the Glyders in the dark. Thirdly, foreseeing the likelihood of night navigation, we should have prepared ourselves as much as possible with bearings, timings and pacings prior to setting out.

While these actions would have increased our chances, it would still have been a tough ask. Despite our walking experience, both Poppy and I were caught slightly off guard by the challenges of navigating during the night and in thick mist. But both of us enjoyed the weekend immensely and we will certainly be back again soon to give it another go.