It’s a rare meet when it’s too hot to climb but we suffered good weather this year and so around 60 climbs were ascended; the classics at Bosigran were well patronised, along with forays to Chair Ladder, Sennen, Pordenack Point, Gurnard’s Head, Zennor cliff, Carn Gloose, the Lizard cliffs, Carn Kenidjack and others. 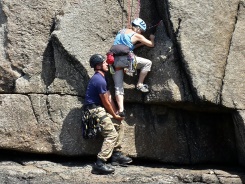 Rosebud in June and Royal Forester at Zennor had the most ascents.

The most adrenalin pumping route (I am told) was Astral Stroll, with ascents by two teams, one of them after an early morning warm up on Bow Wall, the other accompanied by threatening thunder and lightening (but fortunately no rain). The grittiest effort prize was hard fought with lot of people testing their limits of mental and physical determination on climbs as varied as Demo Route, Bow Wall, Commando Ridge (that well positioned first pitch), and Little Brown Jug. The meet coordinator herself just sauntered around, mainly on the back end of a rope, due to a foot op eight weeks earlier, grateful to brave leaders and the occasional anti-gravity top up. 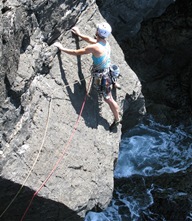 Other highlights were the sociability; you can do 10 hour climbing days in Cornwall by hitting the tides right, or swapping crags to non-tidal cliffs, but this meet included; Tosca at the Minack, (not as storm tossed as the previous La Boheme) with a linear picnic and alcohol in the interlude; a discussion about the state of the cliffs following the winter storms and the impact on grades (Terriers Tooth slab has peeled away on the first pitch); the Lafrowda festival at St Just; the mines at Geevor and Levant; a sunny barbecue on the Thursday; homemade scones with jam and cream on a couple of nights; and communal lightning watching on Wednesday.

The cast mixed and matched on the climbs with alacrity, and there were some 30 combinations over the week which added to the fun and conversations. Finally the ghost may even have joined us and opened a window and a couple of bolts one day after the hut had been left secure; it probably knew the hut warden was coming, and the mystery was not solved . . . . 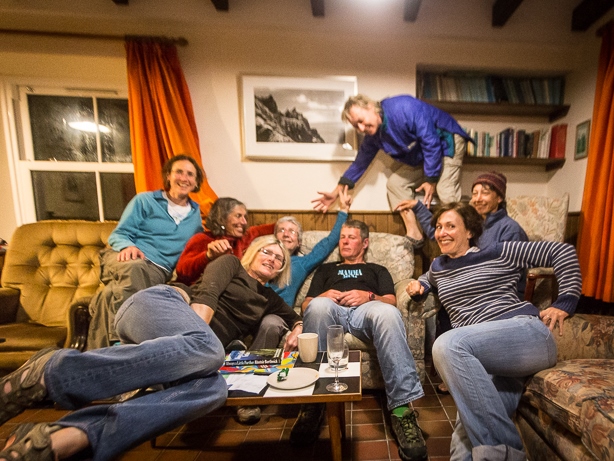