At long last the weather was kind enough to let this meet do what it says on the tin. Although the temperature was unseasonably low the fact that IT WASN’T RAINING meant that Plan A could swing into action. With three of us having Friday off a quick stop at Shepherd’s Crag was the order of the day.  For some it was the first route outdoors of the season and both multi and single pitch classics were enjoyed. Then it was off to Seathwaite for a quick repacking of the rucsacs to head up to Sty Head in the sunshine.
What to do if you don’t have an expedition sized rucsac? Take two – who cares if you can’t see your feet. So, any member who claimed they couldn’t come on this meet on the grounds their sac wasn’t big enough needs a new excuse.  At Sty Head, tents new and old were pitched (one so new it even had the price tag still on it) and we settled down for the night amongst the mountains. 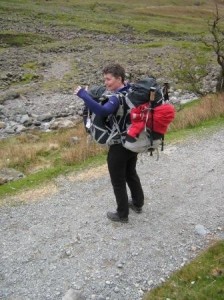 Saturday dawned bright but cold so we opted to stay warm with some scrambling on the atmospheric Napes area of Great Gable. This is the birthplace of English rock-climbing so we thought it obligatory to ’thread the needle’ behind the iconic Napes Needle and took the Climber’s Traverse to Sphinx Ridge. 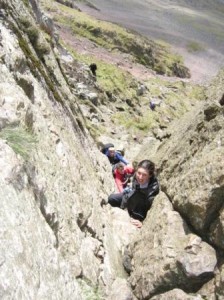 Beautiful scrambling on rough rock with fine airy views down into Wasdale saw us to the foot of Westmorland’s Crag where a natural continuation in the form of the aptly named Pinnacle Ridge beckoned us towards the summit. Interestingly this route is given a grade 2 in the Scrambles guidebook and a Moderate in the FRCC selected guide – which one was going to be right? We soloed it in trainers so you can decide!

Meet cake at the top of the route and then some nice navigation practice for our aspirant MLer led us back to camp. A 5 * day out on the hill. The evening was spent with our Anglo-French team crammed into one tent comparing the backs of cup-a-soup packets. Did you know you can get French cup-a-soups with Sudoku on them? Much in-tent cordiale ensued, marred only slightly when the Meet Leader left an open penknife in the hostess’s sleeping bag… oops!

Sunday dawned ferociously cold so our brave team descended to the valley and took refuge in a coffee shop in Keswick before heading off to Penrith Wall for the afternoon until exhaustion set in. Thanks everyone for another memorable weekend of adventure. Three days of fun; climbing, scrambling and wild camping – what more could a gal wish for?