I’ve never been on a meet with such a load of incompetents! All I could hear was, “Nope, I can’t do it”… “Can you pull me up?”…  “Ooh, I’m stuck”. I dunno; a fine weekend in Langdale (when did that last happen?)… dry rock, blue skies, not a slug in sight… and no-one got up a single climb all weekend.

We got to know the trees around the hut very well, though: tied ourselves to ‘em, climbed ‘em, threw ourselves off and dangled, entangled from ‘em, all in an attempt to emulate the complicated zigs, zags and arrows which our instructor drew on her brand-new blackboard. I have to say she seemed quite impressed with our efforts, but at one stage combined tactics were necessary to replicate the terrors of Snatch Rescue (or was it the Counter-balance Abseil?).

Despite all this there were no actual injuries, although a few people resorted to sitting on chairs rather than hanging stoically in their harnesses. It’s hard work having an epic, you know, though you’d look rather silly carrying a chair to the crag with you under normal circumstances.

I, for my part, successfully escaped the tangle of Hitches and Knots (French, Italian and others that sounded more akin to a Harry Potter spell) and left my abandoned partner dangling while I went back to the hut for a well-earned cuppa. I use the word ‘dangling’ rather loosely, as she was in reality laid out horizontally on the lawn sunning herself.

Eventually – oh my- we progressed to real rock and amused passers-by with our antics at the foot of Raven Crag. The by now familiar whines of incompetent seconds resumed … though we were careful to have our epics close to the ground just in case gravity proved more than our newly acquired skills could cope with. We tied-off, lowered, hauled, heaved and grunted, our hapless partners gaining height inch by inch, assisted by our impeccably set-up hoists. I may not have been the only one, though, thinking we would have been better off learning “Wingardium leviosa”1. 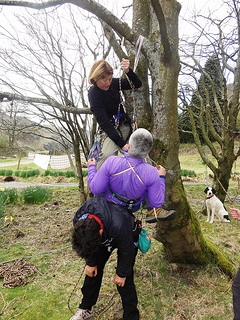