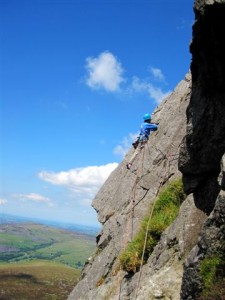 Well, it took us three passes in the car to get the correct left turn through Nantlle (one of the attempts clearly the entrance to someone’s house) but soon Craig yr Ogof presented its mighty frontage to us on what is really a relatively gentle walk-in of around 45 mins (just the nasty bit up the scree at the end).

Falling between the two stools of wanting to be early enough to miss the queue but late enough to be in the sunshine, we heaped the ropes at the bottom whilst waiting for the route to clear of its incumbents. Our early lunch upset the coolly-dressed-in-black Scouse climber twiddling his thumbs on the stance of the first pitch – he’d unwisely not broken into his sandwich stash before setting off.

There remained only the final dither about clothing and we were off up Outside Edge, the classic V Diff on the Great Slab that provides not only good mountain and sea panoramas but a view of Caernarfon Castle. After a straightforward first pitch, the climbing proper starts with an airy rising traverse across a steep wall endowed with good holds if not a lot of gear. Another straightforward pitch and then pitch 4 – a delicate traverse across some ribs (never entirely sure if I was going across on the right level) before reaching what is probably the crux pitch up a wide corner crack. 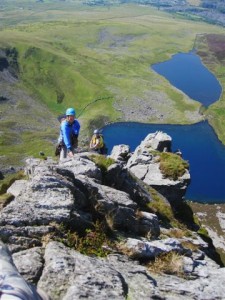 I decided to sally up the wall to the right before returning to the crack when it closed to a more amenable width i.e. no danger of inserting any body part into its confines. The route finally departs the crack for the arête by some neat moves and there I was – in one of the most exceptionally fine mountain positions in North Wales. The teardrop twin lakes far below looked darkly beautiful against the brightness and a finishing scramble in warm sun was made to join our friends who had been climbing ahead of us.  I was now ridiculously overdressed and I shed layers of clothing before coiling the ropes and changing into trainers. The descent (The Great Stone Shoot) is not for repeating too many times in one day and it was certainly worth the trainers bouncing around my backside on the way up.

OK, we had waited at the bottom for quite a while to avoid a frustrating staccato ascent but where did the day go?