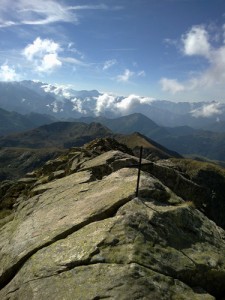 The club was ensconced in three gîtes located close together in the village of Les Cabannes, near Tarascon, Ariège. Le Grand Gîte (The Singing & Dancing Gîte) was the largest with ten incumbents plus a trio of campers. Le Regatcho  … (The Seriously Hard-climbing Gite) housed six and Le Parsou (The Slightly Bemused Gite) were a foursome always playing catch-up because they arrived halfway through the fortnight, (oh no, we’ve already been there … yeah, we did that during the first week ….. etc etc) The weather was a bit mixed to begin with so that the first week alternated climbing with a little sightseeing in Ax-les-Thermes, Mirepoix and the like. The temperature hotted up in the second week so seeking shade became paramount and days-off were taken by more than one.

Although we could find no Wi-fi in the village one of our party had a convoluted BT mobile package which meant she could get the weather forecast each day – a godsend for planning around the rain during the first week.

A meet lasting two weeks is not for the faint-hearted and before we left the UK there had been several Excel spreadsheets whizzing around covering bed nights, bedding and car hire . The attention to detail over car hire permutations tested just about everyone (I did take a quick look and, horrified at what I saw, blessed the fact that I was in a UK car).

The handful of UK vehicles wended their way south by a variety of routes (no two cars actually went the same way thus proving the Pinnacle Club is nothing if not diverse). One party braved the cheap but exhausting drive-all-night scenario and therefore risked driving into any of the innumerable iconic plane trees that line French roadsides. A tragic early death, yes, but alleviated by the knowledge you would die in your sleep (surely everyone’s preferred option). The rest of the group obviously flew, mostly to Carcassone or Toulouse, and less obviously to Nice. Although airport car hire ensured optimum flexibility for climbing days, some took the train which comes right through to Les Cabannes from Toulouse. 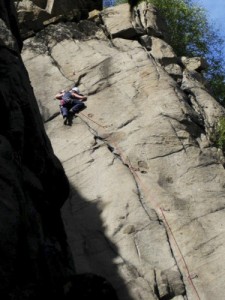 The climbing in this area north of Andorra benefits from easy access (in fact you could even walk to the crags at Calamès if you based yourself in Tarascon itself), covers a wide range of grades, and boasts angles from the gentlest of slabs to overhanging monsters. Choose your rock – limestone, granite or gneiss, and your route length – from single to 20+ pitches. Everything is pretty well-bolted although some of the multi-pitch routes do have traditional protection. French guidebooks will soon be supplemented by a forthcoming Rockfax guide.

I can report there were a couple of fiascos involving the President and rucsacs, on the same crag and on the same day.

Climbing in Party Two (a fact important for narrative purposes), the first fiasco saw her descending and climbing again the first pitch of Pour Lubeline on Le Pilier de Cathares. Why? Was the climbing so good she had to do it twice? Alas no. Short term memory issues ensured she left the small red sac containing trainers, water etc nicely displayed on the ground and would only remember when she reached the first stance. 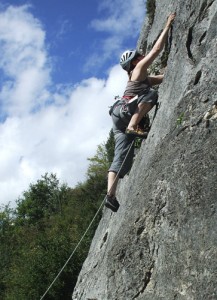 Later, Party One dropped too low on the descent path and were obliged to hack back up the zigzags to their sacs (all of course unbeknown to Party Two). Thinking Party Two would repeat their error, Party One brought down the sacs belonging to Party Two in an act of helpful insanity. The consequences of the fatal flaw in their logic finally revealed themselves but only to Party Two who, correctly cutting back under the crag to the bottom of the route, were confronted by A Wholesale Absence of Sacs. Initial consideration of a practical joke was elbowed out of the way by the presidential certainty there had been a robbery. The loss of one credit card, more than one mobile phone, the car keys (and therefore the chance the whole car now gone or trashed) was not an outcome to be made light of. Diligent searching in the undergrowth drew a blank and it was a silent and sombre trio who eventually descended the zigzags contemplating the ramifications of this calamity. Oh cries of joy! Helpfully if ostentatiously lined up on the main path were the sacs and Party Two soon began planning a theatrical revenge. A dramatic entry into Le Grand Gîte clutching a cauliflower (all they said they could now afford for tea) presaged a classic piece of tragic acting fired by their apparent devastation at Le Vol Français.

How named The Singing and Dancing Gîte? Two birthdays and a mid-meet party provided plenty of opportunity for show-offs, and a general lack of tolerance for one another’s Ipod playlists meant there was much musical variety. Highlights included Jo and Annie Auld Rope facing off in a high-toned rendition of Sparks’ 70’s hit This Town Ain’t Big Enough For The Both Of Us, an equally high but altogether more excruciating version of Heart’s power ballad Alone by Annie and myself (well, just count those octaves), and I Know Him So Well with Annie and Sue (who knew the words so well). Five Do Bohemian Rhapsody was marginal but the choreography was really left a little wanting during Beyonce’s Single Ladies. But hey, at least we had a go. 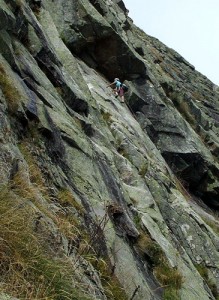