In Praise of Via Ferratas 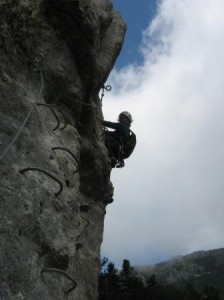 Thanks to power of the Internet it is now possible to know that it is pouring with rain in the French Alps just when you plan to go on holiday there. So, it was a quick change of plans for the Doctor and I and we drove straight through France until it stopped raining, somewhere just south of Grenoble. Orpiere was the nearest place to climb so we holed up there for a couple of days with hordes of Dutch and Germans washed out from higher mountains. Well, it was far too busy with pasty northern Europeans littering the crags so instead we got out our via ferrata kit and aided by some very helpful leaflets from the tourist office explored some routes in the Buech area.
Fact! Via ferratas are FUN! If you’ve never been think extreme scrambling but so much safer because you’re clipped into a lovely big wire cable. Of course the French haul the whole of their family up them in large jolly parties although that’s not to say it is possible to kill yourself on them. So do read the instructions on your fancy shock-absorbing lanyards.
Our first attempt at a suitably easy route in the delightful Gorge d’Agnielles left us ashen-faced at the thought of small children romping across the vertiginous drops. In our defence though, it was wet. Probably why there was no-one else on it at the time.
Most of the routes we did were easily accessed (ie: road-side) so are ideal for all you sports climbers who don’t want to build your legs up, but there are also some stunning longer routes with plenty of atmosphere to satisfy any closet mountaineers. They’re graded as for alpine routes from F through to ED. We did a couple of TD’s and thought they were brilliant; at this grade hard enough to make you nervous before you started and with lots of technical challenge to keep your nerves jangling the higher you got up the route. Great stuff!
The French seem to have been very busy re-equipping existing classic routes as well as putting up entirely new ones. One or two of the most high tech routes charge but for your five euros you get features like a 300 metre zip wire – there’s something to make you scream. Just make sure you hire the correct sort of pulley…. don’t even think that, being British, you’ll be alright with some bit of ancient hardware you dug out the bottom of your sac that you once used for glacier rescue. But who needs to pay when, for free, you can terrify yourself on overhanging pillars, traverse across unthinkingly huge chasms, recreate those Himalayan moments on pont nepalaise (think Steal Falls wire bridge) and teeter across rickety planks with nowt to hold onto.
So, if you’re bored of bolts and the mountains are too wet have some fab fun getting fit on via ferratas. There is an English guidebook to all the French via ferrata available in the UK but it is now dated and you can get a new version in France (in French, surprisingly!). Go on, you know it makes sense. 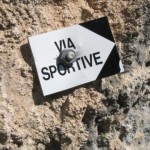 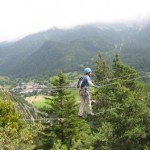