Pinnacle President on the One Show 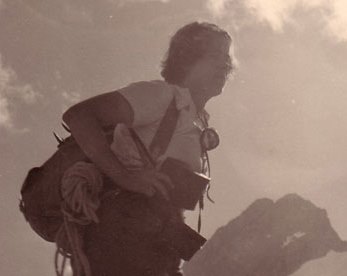 In August 1959, Eileen Healey, then President of the Pinnacle club, was part of the first all-women expedition to an 8000m peak in the Himalaya. Led by French Alpinist Claude Kogan, the party aimed to climb Cho Oyu and as the expedition’s official camerawoman, Eileen also caught this historic moment on film. Although a major step for women’s mountaineering at the time, the expedition did not end well. Four climbers lost their lives on the mountain due to bad weather and avalanche, including the expedition leader Claude, and the party did not reach the summit.

The expedition was recently featured on the One Show, including original footage and interviews with Eileen’s husband and son: watch it here (about 20 minutes in) until March 20.

The film Eileen made was rejected at the time by the BBC, shown to a number of climbing clubs then left languishing for many years in Eileen’s attic. But over thirty years later, it was discovered by one of Eileen’s children, who renovated and digitised it and the film was included as a special feature at the 2009 Kendal Mountain Festival.

Eileen was born in 1920, joined the Pinnacle Club in 1946 and from 1932 to 1958 she kept meticulously detailed climbing diaries. Following her death in 2010, her husband Tim has been digitising these diaries and they will be eventually be accessible online.

An excerpt from Eileen’s diaries, covering a Pinnacle Club meet over the Easter holidays in 1957, was reprinted in the latest volume of the Pinnacle Club journal, available now on Ebay.