Lost and found: 10 days in Morocco 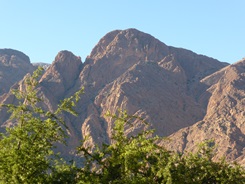 3rd March: A long day, flying to Agadir then driving to the Ameln Valley (passing goats, camels, and various other wildlife) to our destination for three nights: the Hotel Tete du Lion. Those with a very good imagination will see why it has that name when looking at the mountain opposite.

4th March: We found our way, following many half-formed paths and over many boulders, to the Tizgut Gorge on the south side of the Anti-Atlas mountains. Lots of very amenable two-pitch routes. Here, we met a group of Belgians: unusual, because we met few other climbers on the rocks throughout our stay, and most were British. 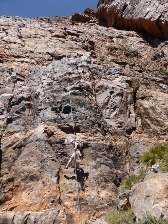 5th March: To Anergui (an adventure in single-track driving just to reach the village), intending to climb a 7-pitch route, “Ride the Wild Wind” (VS, 4c). Even though the route description described it as “adventurous” and warned of the risk of being benighted, the line looked clear on the topo. But we got there and it was far from clear. Undaunted, we chose a line and set off. 45 metres up the crag, it was all feeling implausible: harder than 4c, and taking too long (at this rate, it would be dark before we reached the top, never mind the bottom again). Time to bail. Instead, we went for a walk and a scramble. Somewhere, my glasses fell out of my daysack; by the time I discovered they’d gone, we’d covered so much ground, in such a non-directed way, that there was little point in trying to retrace steps to find them. I never did like those glasses anyway!

6th March: Heading off to the Kasbah Tizourgane, we stopped at the Tarakatine Gorge. The rocks here are reminiscent of Burbage North: 8-10 metres high, broken up with horizontal and vertical cracks. The views and the weather were amazing. But these rocks were such a contrast from Anergui! The Kasbah is beautiful, though many little things don’t work quite as expected (or at all).

7th March: To Dragon Buttress in the Samazar (or Tamza) Valley. 9km along a dirt track took over 40 minutes to drive: going over rocks and through hollows, it felt as if the decision was whether to risk the tyres or the sump. Climbing Dragon Ridge wasn’t technically demanding, but it was a pleasant day out, and a chance to get used to the looseness of some of the rock without worrying about the route finding. The descent (which includes more unexpected ascent, as well as lots of bush-whacking) was more exciting than the guide book suggested.

Back at the Kasbah, we were asked whether we had left anything at the Tete du Lion; not as far as we were aware, so we phoned to check. The Belgians had found some glasses on a path near Anergui; maybe they belonged to one of us? Wow! Who would have expected that? I’m so glad I’d put that ridiculous orange sticker on the case.

8th March onwards: the weather turned colder: apparently more ‘normal’ for this time of year. So we never did get to climb Pink Lady (which is north facing). But we visited more excellent crags, ate lots of tagine and Laughing Cow, and vowed to come back again another time. 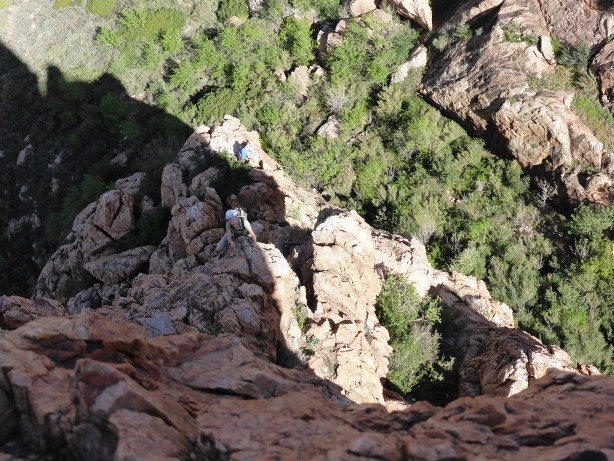