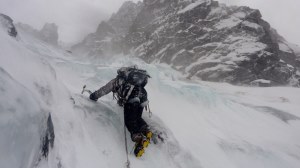 I love cats. Garfield and I have a lot in common- we don’t do mornings. So when dawn broke, and I realised that we’d missed the car park and were driving round the Aviemore ski road one-way system for the second time, the Teddy Bear’s navigation was already looking a bit shaky.

Still there was plenty of time, or so we thought. After putting crampons on too late at the top of a steep and icy slope, then having to take them off again for a rock section,  we traversed across snow and heather to a boulder field. With the crag in sight we slithered, slipped and stumbled through this greasy, jumbled, rocky mess. By 11am we still hadn’t started climbing, time was looking in short supply and I was already knackered.

Suddenly the Teddy Bear spots a line directly above us. Maybe this is it (or maybe it isn’t?), we’re not sure but we have 300m of climbing to do and time is running out. We head upwards. 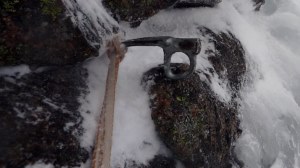 We start in pitches but run out of rope so move together up a broad gully. Then it’s left, over rocks and up to the base of a wall of fat ice. By this time a strong wind and horizontal spindrift have set in. Teddy’s brown fleece hoody is turning white and the view down the valley is coming and going. The ice is good but our screws aren’t. In fact they’re blunt and it’s a real fight to get them in. I bring Teddy up on half an inch of tied-off peg supplemented by a warthog placed by hand. She leads through up more lovely ice.

It’s now just an 80m slog up the gully in deep compacting snow. Teddy wins hands-down with her anti-balling plates while I flounder dangerously on snow stilts. We top out into a typical Cairngorm blizzard.

All that’s left is to battle the wind down the ridge in a whiteout followed by a long walk out in driving rain. But who cares? Teddy and I are two happy bears! 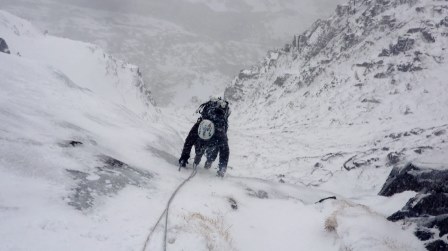