Three weeks in the Ecrins. What could be better? Well the temperature for one. Driving down through France we topped 36˚C (outside) and endured the hottest night I’ve ever spent in a building since Darwin YMCA in 1999. That accolade now falls to the F1 hotel in Troyes. 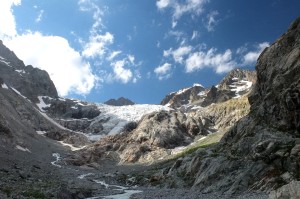 When and where you climbed in the Ailefroide valley became important considerations in the heat; difficulties compounded by the fact it was August (French school hols) and therefore nombreux enfants sur le rocher. Twice we were driven back from the sports crags by the pitter-patter of tiny feet and were obliged to find relative peace on less popular sectors.

And the grading! Particularly on those bald single-pitch sports routes. Even an early foray onto a multi-pitch resulted in an equally early retreat as we decided we were having to do a disproportionate amount of bolt-pulling – and that was just on the first supposed easy pitch. N.B. This sense of crushed despondency was relieved later in the trip when we discovered we had actually been on a different (and much harder) route.

Everyone on the campsite seemed to have a slackline – including us. With one exception we did not witness any great skill on any of these lines, but did observe a spectacular dumping on the ground by the young man opposite. Sadly, this was only shortly after he had ejected himself with similar lack of élan from his hammock. Known by us as The Tosser thereafter. 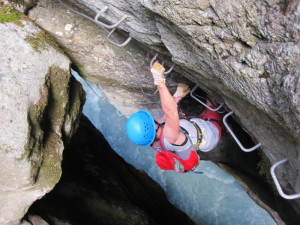 The successes ? Via Ferratas definitely were as we swung flamboyantly about on VF kits which had recently wiped out all the current stock in the Decathlon stores of Sheffield and Reading. It wasn’t all hunky-dory though. A small team reduced the guidebook time by at least two-thirds (to 10 mins) on one route only by dint of the fact it was pathetically short, perhaps equivalent to a pitch at Stanage. The whole party missed out on a attractive-sounding mountain VF when it was discovered that a) the scrambly approach up shattered limestone did faint the heart somewhat (and create anxiety about what it might be like higher up and b) the lower section had been completely de-equipped (adding concern over what could be missing elsewhere). It was described in the guidebook as “suitable for beginners”. Mmm. It should also not go without mention that our first (and successful) VF expedition bizarrely included walking past a group re-enacting a scene from The Sound of Music (a nun and several children sitting on a mountainside). 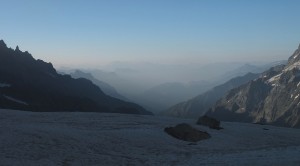 The biviing sub-group (of which I was not a member) did not enjoy the best of Alpine conditions because of the warm temperatures. Snow conditions were poor even early in the morning (although any crevasses could be seen from miles away) and a 5 hr walk-in to the Ecrins hut was followed by the equally long walk-down later the same evening because their proposed route was a mere slushy track without any alpine merit.

I must also refer to the burger-less burger incident. A decision to eat out one evening in the village ended in culinary disaster for the vegetarians who were already dismayed at the prospect of paying €14 for a veggie burger and chips. Dismay turned to hysterical incredulity as we searched in vain through our bap for said veggie burger. No, not to be found – we had simply salad vegetables in a bun (not forgetting the chips). Remonstrations carried out by our best linguist Ann Jam with first the waitress and then the under-age chef ended in dual Gallic shrugs from both of them (and no satisfaction from us).

Lessons learned?
Wear a cap (not a hat) and don’t put sun cream on your forehead. Believe me.
Don’t put your sunglasses down in long grass.
Check your gas cylinder regulator before you leave home.
Don’t ask in campsite reception if anyone has handed in a bottle of shampoo and expect to be taken seriously.
Train, train, train. Not really, go in a car.