A poem about the Tarmachan Ridge

Still, it all ended well despite the concerns
Of some members with crampons which refused their turn
And were stuffed back into rucsacs forcing their owners
To slither and dither – no, there weren’t any moaners
At last the jolly party returned from whence they had came
And declared, one and all, that the end of the adventure was really a shame! 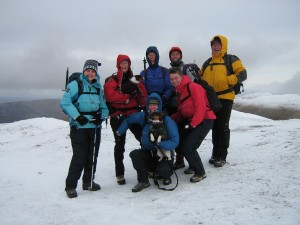