This was a meet for those not foolhardy enough to be playing outside in -12o. Our meet leader had devised a Plan, which started on Windy Ledge at Stoney Middleton, left the Ledge through a 25m tunnel crawl, then returned via the V Diff traverse of Tiger Trot back onto the Ledge. I’d signed up for this, naively assuming the reference to a ‘tunnel crawl’ in the meet blurb was an over-elaborate attempt to ‘big-up’ some unassuming mod traverse. It quickly became clear that ‘tunnel crawl’ = ‘crawl through a tunnel’  – i.e. the sort of thing cavers do. (It’s called Bossen Hole in case you need to avoid it in the future). 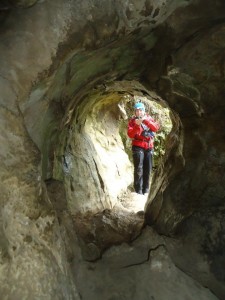 In the 80s, whenever I climbed at Stoney, I would spot sorry-looking muddy orange overalled types crawling out of the undergrowth and feel sorry for them. Now I know what they were doing and realise my pity was misplaced – they brought their misery on themselves.
On the plus side, the tunnel was dry and out of the wind. On the downside, it forced you onto hands and knees, getting narrower…can’t turn round width … breathe … can’t see round the corner… how much narrower … breathe… breathe. By now I was at risk of hyperventilating so I insisted that H. in front of me kept talking (I needed on-going evidence that she was not stuck or suffocating which would have meant crawling backwards … breathe….). 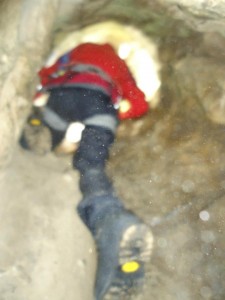 Having survived that, I noticed that everyone else, as they emerged triumphant into daylight, had a beaming expression of relief on their face. As a reward, next came our very own via ferrata, which our meet leader had set up in advance for our delight and delectation. Now this was more like it! Heart rate back to normal, we set off on a wonderfully high traverse, with juggy, pockety holds and positive footholds, although a bit skiddy in big boots. With12 of us, progress was slow enough to allow time to enjoy the view across the valley of the snowy fields and roof tops. 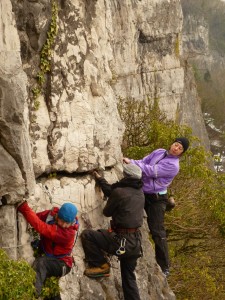 Back down, a spot of lunch at some Roman/ Mediaeval baths, then a walk to Eyam the plague village, visiting the church and other significant landmarks, and back to the Moon at Stoney for beer and chips. Perfect.