by Di Neema
As someone who hadn’t properly dressed up since childhood the prospect of a filmed  rock climb in celebration of the 90th Anniversary Year of the club excited me greatly. The problem was that I didn’t much want to climb Lockwood’s Chimney (a classic Diff on Clogwyn y Bustach), only to dress up in 1920’s clothing for a lark. It was a big turn-out at the hut and most had made a real effort with their outfits and not a little money spent in some instances (see first picture). There was, it has to be said, a lot of tweed. Only one participant got the whole thing wrong by dressing impractically as Chicago’s Roxie Hart. Her flapper outfit boasted a handcrafted headband (the ruched ribbon frill from a lampshade no less), beads, high-heeled shoes (sadly disintegrating) all topped by the ultimate accessory – cigarette in a holder. 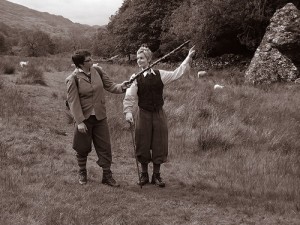 The start time was brought forward because of a poor weather forecast and by mid-morning a large party had amassed at the bottom of the route. Three different examples of hawser-laid technology were brought out and women in strange dress reacquainted themselves with the intricacies of tying a bow-line. Modern gear included a couple of ropes, a few slings and krabs but there were no helmets, harnesses or rockboots. It was either walking boots or trainers, the soles of brown brogues considered too smooth for safe passage.

I’d never previously climbed the route but I knew in my bones that Lockwood’s Chimney would be the direst of experiences for someone of my elegant slab sensibilities. With the certainty that the rain was a’coming I expected a few to drop out at this point but by heck – a forest of eager hands went up for the ascent. Maybe they didn’t realise at this point that while the chimney itself would stay reasonably dry, they would get utterly degged on after leaving it.

I was in a quandary. My absence would now be more obvious than I’d planned for so I was becoming concerned about being given the white feather. However, a dent in my personal reputation seemed as nothing compared to a pathetically bad climbing performance recorded for posterity. Once everyone was safely ensconced on the route in the perfectly-timed rain, I hot-footed it back to the hut under an out-of-period Decathlon brolly. In the company of the equally wise Official Photographer, I enjoyed hot coffee in the dry whilst others suffered. 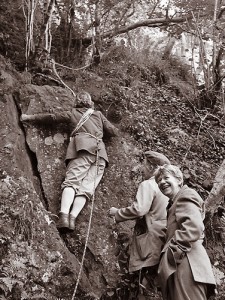 Fellow blogger, Deidre O’Caunagh (see left), stomped up and over a newish club member to surmount the crux chockstone in a fine display of combined tactics and disdain for the pain of others. Twelve more followed, all inadequately clad for the conditions, each demonstrating the fine arts of thrutching, sling-clutching, and scrabbling. Some of those pristine outfits were irrevocably damaged and bruises were sustained that would last for many, many days.

Am I sorry I missed it? Given my primary aim on this meet had always been to be theatrical (not battered and wet through) I have to regretfully regard my decision as a sound one. 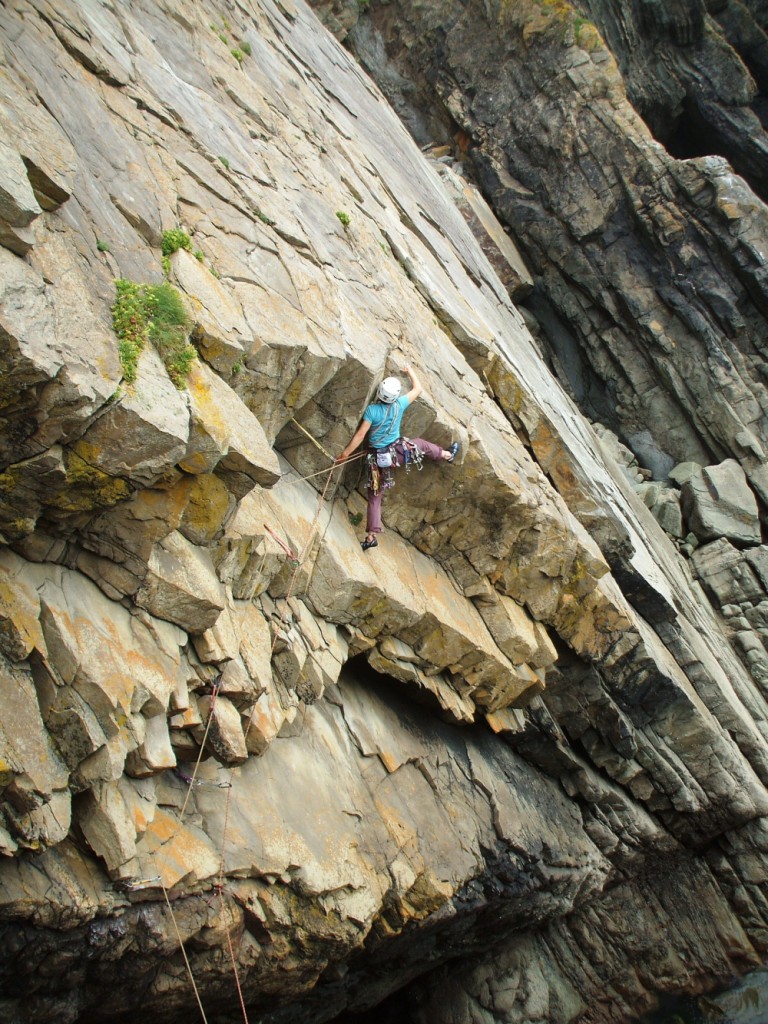 Just what is the definition of ‘short’ in climbing terms? At a smidgin short of 5’4” (162cm) I think of myself as short-ish, as most of the women and all the men I climb with are taller than me. I shy from leading routes with ‘long’ or ‘reach’ in the description; if your average guidebook writer thinks you need to stretch a bit I am quite likely to find it necessitates the kind of telescopic manoeuvre where you can’t actually breathe anymore because your ribs are so extended. I do remember though, years ago, a 6’ friend asked how I was able to climb Billingsgate at Millstone Edge, as he found it reachy; my response was that I just climbed between the holds.

This is about a route where there is no ‘in-between’.

Trepidation, then, as ex-President orders me to do Kinky Boots at Baggy Point, one of those classic Devon routes everyone should do, but no-one could ever assure me I would be able to do (and it’s not the grade I’m talking about). You know the one: “fall across the zawn…”. My beta is that instead of falling with both hands you can reach with one hand, follow with one foot and the second hand, then ‘just step over’; except for me the holds I can reach are not the large, chalk-covered ones, but some about 8 inches lower and to the right and rather less useful; and once one toe is (just) touching the opposite side my balance is quite wrong for ‘stepping over’. It’s going to have to be a definite upward pull using side-holds at full-stretch – all over that sea-churned gap. 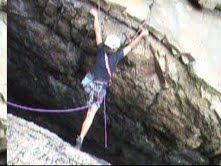 After several teetering retreats, either succumbing to the nerves or needing to relax the overstretched groin, I eventually fling caution to the winds and launch myself across. Surprised to find I do, in fact, stick to the rock the rest of the pitch follows enjoyably. However the next problem is finding someone to second the pitch. The first contender is only 5’1” (155cm) and, despite having the annoying habit of out-bouldering me on moves I say I can’t reach, is literally doing the splits when her foot is across and can’t move to reach anything to pull across on. In fact, the only way she gets back is courtesy of a heave on a back-rope. Eventually conceding defeat the rope is passed on to contender no. 2, towering above her at a lanky 5’3” (160cm). Those 2 inches prove decisive, as she can just get her hands on the same holds as me, makes the move and the route is in the bag.

So there you have it, the minimum height for Kinky Boots is empirically tested by the Pinnacle Club as 5’3” and aspirants of 5’1” needn’t bother tying on the rope. (Sorry, no.1)