by Deidre O’Caunagh
Ah, the travails of the meet leader faced with a shockingly bad weather forecast; the disappointments, the gentle letting down of those aspiring to go high…

And so, Saturday morning dawned with instructions for an early start to gain the rather small weather window promised by the Met Office. However the Meet Leader’s hopes of glory were limited by all members of the group being injured bar one. However by the end of the day this was rectified!

The first diversion was made to the village bakery to stock up on bargain bread and despite senior members of the club pointing dramatically at the glowering clouds amassing over the Pennines all climbers were forced back into their vehicles and progress continued to Windmore.

On arrival at the crag International Lamb Rescue was called into action and members were able to further delay their climbing in order to raise the farmer to collect a lost and shivering lamb. The lamb safely collected, teams made ascents of Remus, Longman, Most Sincerely, Arty, Andon and the Tomb all enjoying the sporting grading at the crag. Other highlights included my climbing with someone for the first time in twenty years (I had just assumed we must have climbed together having been around for so long) and Windmore living up to its name as being extremely windy (adds at least a grade) but possibly the only dry crag in the north-west of England. After five routes talk of the tea shop was being raised however cries of “It’s not raining yet” were heard so in frustration she-who-shall-not-be-named was forced to hurl a rock down upon the Meet Leader thus ensuring a speedy departure from the crag and a full complement of injured parties. 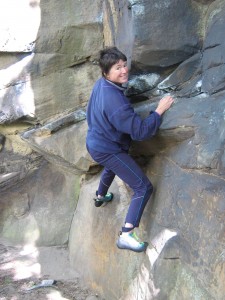 Sunday dawned and the team remained UNDAUNTED; despite heavy rain showers and the prospect of a fine tea shop a jolly couple of hours were spent bouldering at Armathwaite. It may be only two feet off the ground but hey, it can still be scary!

Can’t wait until we get to go high again!

Tactics for a cold day

After the hot dry April, it was a return to business as usual for May and so I found myself at a deserted Stanage on a cold blustery Sunday with woolly hat and gloves on.

Neither of us had been to Stanage this year so we were determined to make it work for us as a venue despite all signs to the contrary. High winds? Check. Freezing cold temperature? Check. Regular squalls of fine rain, the kind that gets you wet without noticing? Check. We told ourselves that at least the friction is better on grit when its cold as we donned our winter climbing gloves.

First up was Bee, a nice V Diff, it had positive holds and plenty of gear and so was quite unlike most V Diffs at Stanage. Next I decided to lead a two star Diff – Left Twin Chimney, I normally hate chimneys but I could see that at least it would give me shelter from the wind once I managed to get inside it. And so it did and it turned into a very enjoyable bridging exercise leaving me reluctant to step out onto the windswept top to set up a belay. I looked down onto my second as she climbed up to join me and noticed that the back of her gillet was getting soaked. Then I noticed it was MY gillet and she was bringing it up for me to wear, what a star!

We had quick scan through the guidebook and there was a request for ‘something shorter’ – not something you normally hear at Stanage but belaying was becoming something of an endurance test. We wandered back down towards the plantation car park until we found Newhaven, a 6m Diff that was quickly dispatched.

The grey sky seemed to be getting lower and the showers more frequent but determined not to give up, we headed off to the shelter of Lawrencefield to continue climbing.  A speedy accent up Snail Crack then we called it a day before hypothermia set in. You’ll notice that there are no photos for today, no one wanted to hang around long enough to get a shot.